A shallow bowl with brush decoration of a branch or trunk with plum blossom.

Totaro Sakuma was already established as a potter in Mashiko when Hamada arrived. Sauma befriended  the young Hamada and allowed him to use his kiln. Eventually, as Hamada’s reputation became widely known he began to overshadow his friend but through Hamada Sakuma also became well known and was one of the best of the Mashiko potters.

Here is a fascinating and insightful article by the Japanese ceramics authority Robert Yellin    http://www.e-yakimono.net/html/sakuma-totaro-jt.html

Comes with a signed and sealed wooden box.  Circa 1945 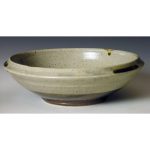 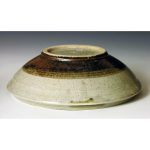 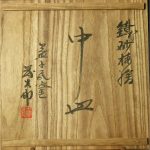